Guissone ended his home Championships on a high in the men’s foil category B, claiming his third gold in as many days.

The 39-year-old retained his title from 2018 and is now unbeaten in the weapon at four editions. It is also the first time he has claimed titles in epee, sabre and foil at a single Americas Championships.

Guissone eased past teammate Vanderson Luis Chaves in the final in a repeat of four years ago, and did not lose a match on his way there.

Speaking afterwards he said that he had now raised his target of one gold medal for each of his three children, to two:

“That’s the goal. I want to see if I can take two each in the end. I am very happy to have conquered the region in the three weapons and now I think about the next challenge: Hungary [the next World Cup]. This will be the first test that counts towards the Paralympics [at Paris 2024]. I’m going with everything, focused on my objective of getting the best result.”

The US duo of Scott Rodgers and Josh Russell occupied the bronze medal positions. It is Russell’s first medal at this level and Rodger’s third of the week from both individual and team events.

Matches can be watched back at the IWAS Wheelchair Fencing website, alongside results. Pictures are available for editorial use here.

In the men’s foil category A there were further medals for the USA as Byron Branch kept his gold from 2018 after an all-American final.

Branch was facing a new opponent in compatriot William Schoonover, competing in his maiden major final. 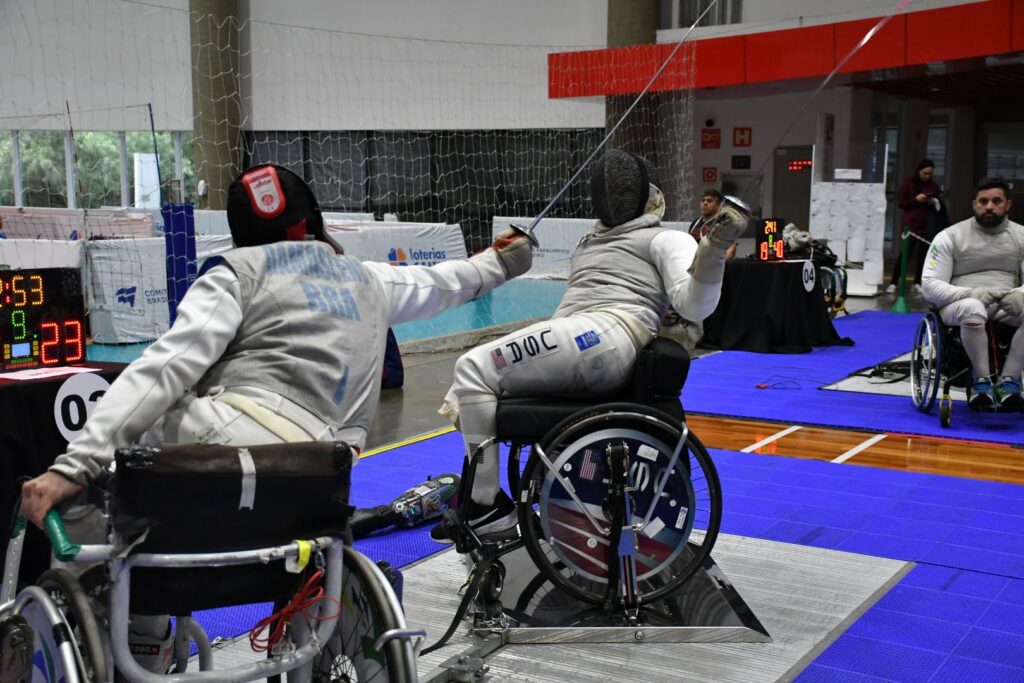 In the end Branch’s experience shone through, despite not stepping onto a piste since early 2020.

“It’s great, honestly. I’ve been away from fencing for a while because of things that happened with COVID,” Branch said. “I really wanted to come back and make sure I was as sharp as I could be. I was a little rusty in pools but overall I felt good once I got to the DEs [direct elimination]. Things turned out well.

“I was nervous. I never fenced him [Schnoover] before. So I had no idea if the tactics I had set-up were going to be effective on him or not. It turned out what I did worked so I’ll keep doing that and improving on that.”

Branch also dedicated the win to his wife, Brittany.

Schoonover meanwhile will also be happy with his silver medal, standing alongside Brazil’s Alex Sandro Sousa and Canada’s Doug Brecht who claimed bronze.

In the men’s and women’s, Brazil took their overall gold medal count to nine by claiming both titles.

First-up were the women consisting of Fabiana Soares, Rayssa Veras, Oliveira Carminha and Monica Santos. Adding to their epee win from earlier in the competition the four-piece overcame the USA.

Argentina were second having executed a surprise – and narrow – victory over Canada in the semi-final. Jorge Michiardi, Carlos Freitas, Franco Meza and Hugo Alderete joined forces to beat the Canadians by just one point but Brazil proved too strong for them in the final.

In the clash for bronze, the USA emerged the victors against Canada; Branch, Rodgers, Schnoover and Nicholas Badeux rounding off a great day for the US team.