Day 5 at the Wheelchair Fencing World Championships in Hungary

This fifth day is all dedicated to Epée competitions.

The Iraqi expedition was very remarkable for its performance with young but strong fencers that in this day subdued the French 45-39, getting on the third step of the podium beating the Polish Team 45-43.

Russian Team overcame Thailand 45 – 32 and Iraq 45-30. In the final, fenced in the large Finals Hall on an illuminated piste and was streamed live on the FIE TV channel, It has to settle for a silver against China. 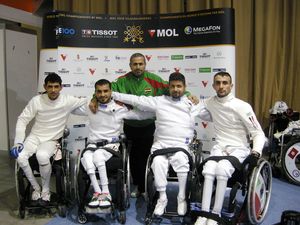 The support of the home crowd was amazing for the Hungarian Team that gained the third position of the podium.

China showed again their dominance in this World Championships with Rong – Wu – Yao –Zhou taking the second gold of the day.