The first team competition of the Tokyo 2020 Paralympic Games took place in wheelchair fencing on Friday (27 August) as the epeeists took to the pistes at Makuhari Messe. Full results are available at The International Wheelchair and Amputee Sports Federation (IWAS) Wheelchair Fencing website. Pictures are available to download for editorial purposes. Sixteen teams battled […]

The first team competition of the Tokyo 2020 Paralympic Games took place in wheelchair fencing on Friday (27 August) as the epeeists took to the pistes at Makuhari Messe.

Sixteen teams battled it out for six medal spots on the Paralympic podium as fencers reached the halfway point of the competition.

All finals matches were a replay of earlier pool matches with previous results being upset, much to the delight of the Paralympic volunteers watching on.

In the women’s final, China had everything to prove against Ukraine after a thrilling earlier bout in the pools.

There Ukraine’s Yevheniia Breus scored 13 points against China’s Jing Rong to snatch the lead 45-44 and take the top spot.

In the gold medal final, Ukraine struggled with the intensity China bought from the first point in the opening bouts. It was clear they wanted to secure their twelfth medal of these Paralympic Games, and Shumei Tan’s third gold, which they did in impressive style winning 40-17.

In the sixth round, Rong was cautious against Breus and yellow carded for passivity but neither Rong nor Breus were willing to relive their pool bout and neither scored against the other. To make up for this, Rong then scored 10 points against Natalia Mandryk, who only managed four in return.

Talking about teammate Tan, Rong said, “She’s the rookie at the Paralympics on our team, but she’s been amazing. She always tries her best in every match and she won everything.”

In the final bout, Jing Bian played the clock well and only allowed Breus two hits before China were named gold medallist and Bian could add a gold to her individual epee bronze from Thursday (26 August)

Celebrating China’s success in Tokyo, Rong continued, “It’s like a dream to win my fifth gold medal at the Paralympic Games. “I tried my best to win every bout I was in, and so did my teammates so the result came out like that.

“It has been difficult but I tried to calm down in my bouts and do my best to win. This is my third time at the Paralympics and I feel happy and excited just like my first time in London 2012. I would like to thank Tokyo for putting on these great Games.” 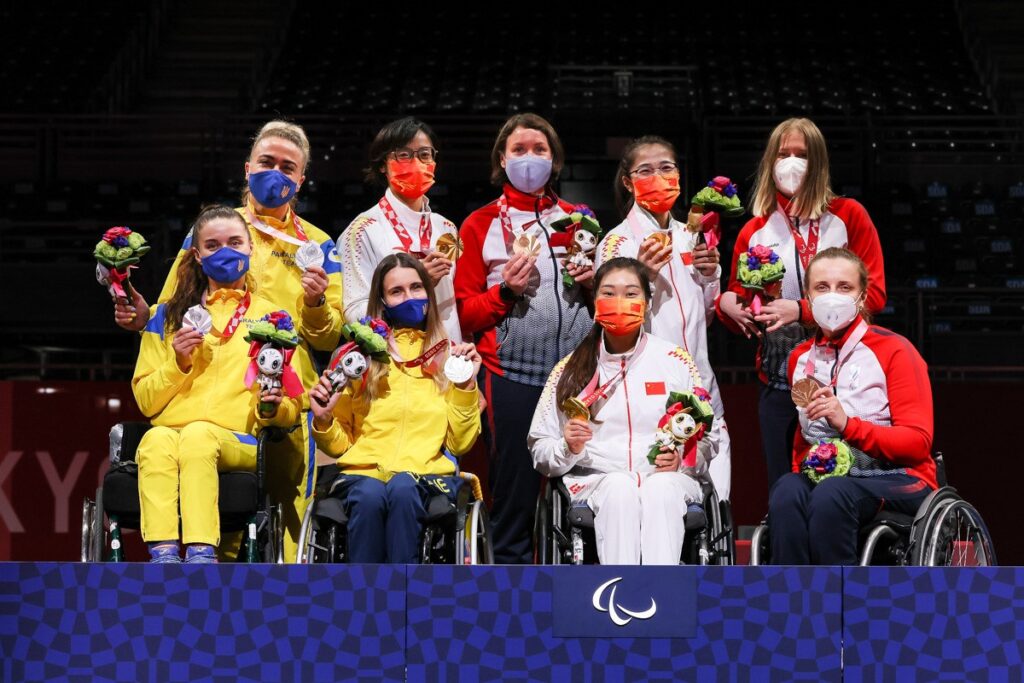 In the bronze medal match, Hong Kong improved on their preliminary pool loss 45-22 but were unable to get past the Russian Paralympic Committee (RPC) who won the medal 45-34.

Yu Chui Yee put in an impressive 10 points against Viktoria Boykova, and Justine Ng twice scored seven points but this could not negate Yuen Ping Chung’s two pointless bouts. The RPC led from the first bout and did not leave any room for errors.

Reintroduced in Rio 2016 after a twelve-year absence from the Paralympic Games, the inclusion of the men’s team epee competition at Tokyo 2020 demonstrates an increase in the depth of the fencing pool that countries have to draw from.

There is a new Paralympic gold medal-winning team after France, who took gold in Rio, Sydney 2000, and Athens 2004 failed to progress from the preliminary pools. Poland, bronze medallists from five years ago, also failed to make the podium this year.

Instead, the RPC faced China for gold.

In the opening bouts, the teams kept trading the lead as China started well, before the RPC’s Arthur Yusupov took seven points to claim the lead. Jianquan Tian then registered nine points to begin a fight back but after Maxim Shaburov took eight back in the fifth bout, he reclaimed the lead and China could not make up the difference.

Tian again tried to reclaim points, and managed six but it was left to Gang Sun in the final bout. After a last minute weapon change Sun failed to overpower a dominant Shaburov, who traded up his silver medal in the individual events and claimed the RPC’s fifth medal of Tokyo 2020.

Tian wished they had performed as they had earlier in the day: “Actually I feel a little regret because it has been a very close match.

“The only factor that decided our loss was only little tiny details. They just performed better than us in these little details during the match. That’s why we feel a little bit of regret with not winning gold.

“All of us two teams are really good fencers. There are many factors (that) influence the final result, and sometimes you win some other times you lose. We did our best and we congratulate them for winning gold.” 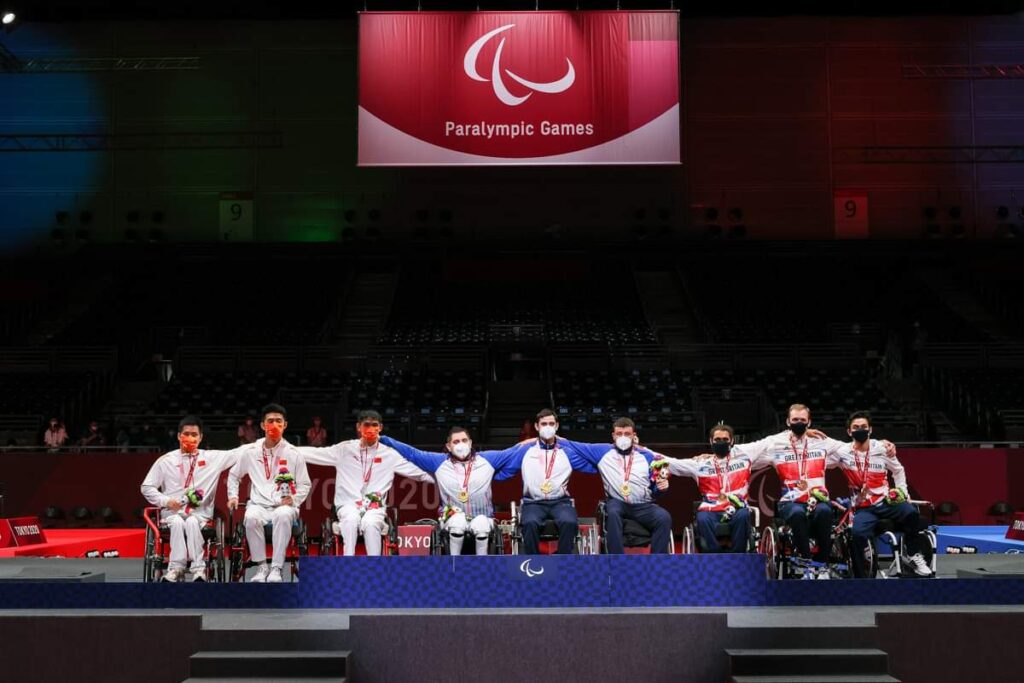 Despite scoring ten more points than in their pool match, Ukraine could not get past Great Britain.

In the penultimate bout Artem Manko worried Oliver Lam-Watson, making his Paralympic debut, as Manko registered 12 hits narrowing the scorecard to 40-35. Lam-Watson persevered before handing the weapon over to Gilliver.

Throughout his time in Tokyo, Lam-Watson has been thinking of the people at home who are engaging with the Paralympics due to the restrictions on spectators. “I think the role of social media is huge. When I grew up I was watching a lot of the Paralympics and the Olympics and there was definitely a gap between where I was as a young disabled person, and these kind of heroes, these statues of amazing kind of feats that are on the TV and behind the screen.

“I think after London 2012 that kind of really opened things up a bit and with social media coming in I tried to share the journey, not just the kind on the TV and the results and the medals, but to share the struggles and show to my younger self what’s possible.”

According to Coutya, Tokyo 2020 is a stepping stone for the team in readiness for Paris 2024: “That’s definitely the plan. The progression that this team has made in the last couple of years is absolutely phenomenal. I appreciate people watching on the outside may only see it from the results but us three and our coach knows how much work has gone into this, and it wasn’t easy by far.

“It’s also been a really challenging year, but the fact that we’ve grown so much, under such difficult circumstances, shows that there is potential for progression and we plan to continue trying to expand the sport as much as possible within Great Britain, and it’s something that we look forward to, to seeing and being a part of.”

Gilliver had the final word after completing his set of a gold, silver (from Rio 2016), and bronze Paralympic medals.

“It feels really amazing. For me in individual, it was the gold one I really was hunting but looking to progress in the team events was quite a big challenge. Although it looks like it’s still the same individuals, actually it’s a very different game.

“We’re a new team, we’ve not been doing team events that long so I’m just super excited to come here with these guys and to come away as team medallists is really a dream come true.”

Saturday (28 August) will see a return to individual competition as the foilists get to work.

Join IWAS Wheelchair Fencing on Twitter @IWASFencing for updates live from the competition arena and on Instagram @wheelchairfencing for the highlights of the day.