After completing the challenge of winning his first Paralympic title at Tokyo 2020, Great Britain’s Piers Gilliver has a new target in his sights for 2022: European gold.

Gilliver has all the major titles from a more than decade long career in the men’s epee category A. As well as his win in Japan he is the reigning world champion having won gold in 2019. He is also a consistent podium topper in the weapon from the International Wheelchair and Amputee Sports Federation (IWAS) Wheelchair Fencing World Cup.

But the European title is missing. Gilliver has just missed top spot at the last two editions.

“The Europeans has been one of the most frustrating competitions where I won silver in the last two,” he said. “So this one I’d really like to add that Champs to my collection if I can. I’m really looking forward to that as an extra challenge.”

It is with a renewed confidence that the 27-year-old heads into next season, which gets underway with a World Cup in Pisa, Italy, in March.

The gold at Tokyo 2020 allowed him to put some of the ghosts of Rio 2016, where he lost out on the title and had to settle for silver, to rest. But it was not until the semi-final when Gilliver really felt in control. 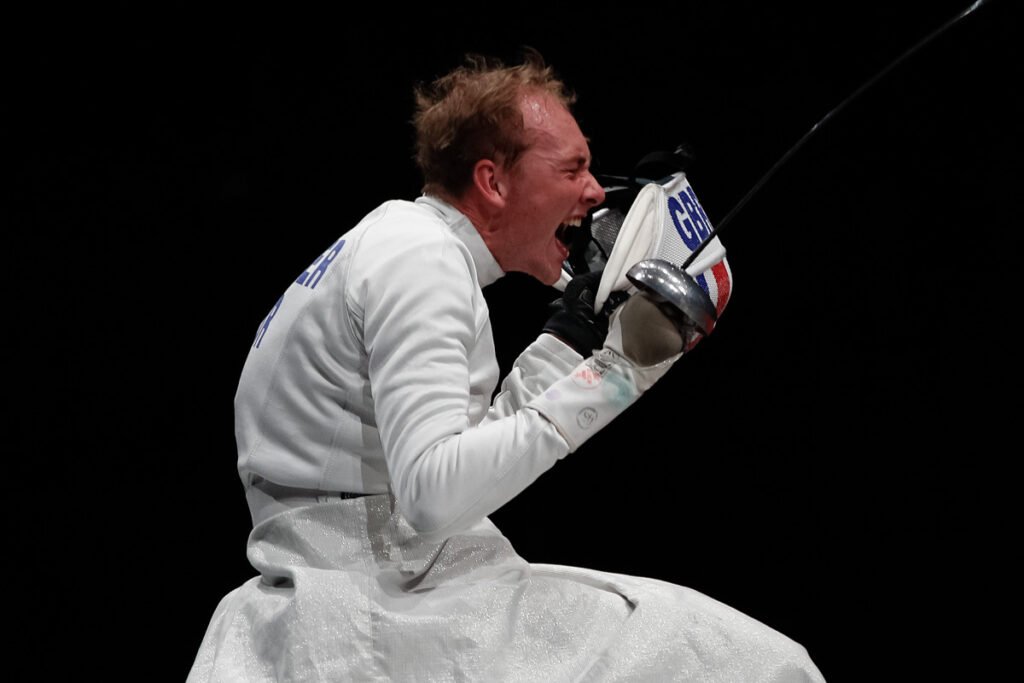 “For me the big turning point in my epee competition was in the last four. I had really struggled with my previous matches and I was fencing really badly. I reacted very differently to being at a Games to how I expected, so it really took a lot to create new psychological processes and change my routines and everything I worked for had to change on the fly. It wasn’t until I beat Sun [Gang – the defending champion who beat Gilliver to gold at Rio 2016] that I finally realised that my fencing had improved and I have overcome this challenge. It was winning against one of the biggest competitors in the world that really made a difference.”

The contrast between the two medals from 2016 and 2021 – despite both being amazing achievements – was marked for Gilliver.

“It really was an unbelievable difference. Silver in Rio stuck in my mind for many different reasons. On one side I had many different challenges at that time so to win silver and to do something that I dreamed of doing was an amazing experience. On the other hand, coming second and by such a close margin really got to me. It was really such a driving force for Tokyo that I had to go one better. So winning gold was an unbelievable feeling. I had set out to do it 12 years ago and to finally achieve that after so many years work was an incredible feeling.

“I remember just feeling so overcome with it all. It suddenly hit me what I had achieved. Through the day you just go step by step through all the analysis and all the clinical processes you have to go through, so then suddenly to actually feel the emotion and enjoy that was such a strange feeling!”

It was not an easy build-up to the Paralympics for any athlete, and Gilliver and the rest of the British wheelchair fencing team of Dimitri Coutya and Oliver Lam-Watson were no different.

Arriving in Japan after a long gap of around 18 months since they last competed, as well as being limited in their training, the trio were not sure how they would perform.

“Tokyo really was unlike any other competition or Paralympics for so many reasons. There was of course the pressure of being at a Paralympic Games and everything you’ve trained for so many years, plus the COVID pressure. How do you not get sick? How do you not miss training beforehand? That was such a huge pressure as well. The other big issue was not having competed for so long. That really made such a difference to performance. You learn your own processes, what suits you, what your kind of routines are. So it was tough not having competed for so long. But I think the team did really well – despite having not competed we tried to assimilate as much as we could and focus on the fine details so we were the best we can be.”

In-fact the team had nothing to worry about. As well as Gilliver’s gold, Coutya also grabbed his first Paralympic medals in the foil and epee category B. Teaming-up with Lam-Watson for the men’s foil and epee team events also delivered podium finishes for Great Britain for their best-ever overall performance.

“We’re not just three random guys just stuck together, you know, we’re best mates, when we’re not fencing we’re spending time together. I think that closeness makes a difference for the team events,” Gilliver said.

But where to go next? With the Paralympic epee gold now firmly under his belt and the Europeans next year, double Worlds sabre bronze medallist Gilliver is also thinking about the longer term direction for both himself and his team.

“Epee will always be my main focus. It’s a weapon that comes naturally to me. It suits my personality and the way I fence. But also sabre is something I’m really keen to progress. I had a disappointing competition in Tokyo so I’d like to put that right that in Paris [2024].  I think as well the team event was really fantastic for us. We won two medals which I don’t really think we expected and I think it really shows we are in exciting times. The sky is the limit for Paris and we’re looking forward to it.”

Now back in full-time training, Gilliver also had some time to soak up his success and adjust his mindset going forward:

“Things have been really good since I’ve been back. It’s been really amazing to feel everyone’s support and how much it means to them as well. Nothing much has changed really. I still really want to win gold in Paris and nothing has changed there. But on the other hand I see everything else as a bonus now. I fell a lot less pressure internally and I think that’s put me in a good place.”