After the opening ceremonies and training complete the IWAS Wheelchair Fencing World Championships began with the Women’s Epee competition on the 10th October. This competition consists of two classification categories based on disability levels for Category A athletes who have a minimal disability level and Category B athletes who have a more severe lower limb dysfunction.

The fencing discipline of Epee is derived from the duelling sword used to settle maters of honour in days gone by. The blade is stiff and heavy and the guard on the handle is designed to protect the hand. The target for Wheelchair Epee is all the body above the waist and particular to wheelchair fencing a metallic cloth apron is utilised in epee to make the fights flow and reduce stoppages due to hits ‘off target’.

The Poule rounds of fights decided by first to five hits were closely contested. With YU of Hong Kong and Jana of Thailand claiming the first seed place following the ranking calculations in the Cat A and Cat B classifications respectively. The Direct elimination rounds follow the poule stages with fights now being contested first to 15 hits allowing for more technical and tactical changes from the fencers. Semi Final and Finals were fenced in the large Finals Hall on an illuminated piste (metallic strip) and was streamed live on the FIE You Tube TV channel.

In the Cat A final Krajnyak of Hungary overcame WU of China 15-8 with the number one seed Yu having to settle for a bronze medal. Jana of Thailand showed her class and was worthy of her 1st seed ranking by making easy work of her semi-final against Briese-Baetke of Germany 15-2, and taking the gold medal and World Champion title with a close final match against Chan of Hong Kong, winning by a three point margin 15-12.

Men’s Foil followed in the Afternoon with competition being competed in three categories, as before with Cat A and Cat B, but in addition for the Men with the Category C athletes who have limited hand function along with a lower limb disability.

In the Cat A Men’s competition, China showed their dominance of this event taking three of the four medals on offer, with El Assine of France spoiling their party by taking the bronze medal. Ye of China after finishing top of the ranking poules breezed through the elimination rounds taking the World Champion title and gold medal from his fellow countryman Chen in a one sided final finishing 15-3 to Ye.

An all European final for the Men’s Cat B foil had Datsko of Ukraine show excellent technical skills and superior tactics against Latreche of France which led the Ukrainian to a victory and world title with a 15-6 score line.

In an exciting finale to the Men’s Cat C competition the all Russian affair saw Lukiyanov beat Logutenko 15-13 with a vocal audience showing their patriotic support for both athletes. Russo of Italy took the bronze medal to raise local interest and another Russian, Barinov taking the other bronze medal emphasised the Russian dominance in this category.

“The International Wheelchair and Amputee Sports Federation (IWAS) are very proud to be at the forefront of technology and working in collaboration with the Federation Internationale d’Escrime(FIE) with their FIE TV live streaming of events through the internet. We are sure that the exposure of wheelchair fencing to a worldwide audience will enable us to promote our work in developing sporting opportunities for the physically disabled across the globe.” Maura Strange, Secretary General IWAS

3. Women’ Epee Cat A fencer from Poland makes a preperation of her blade 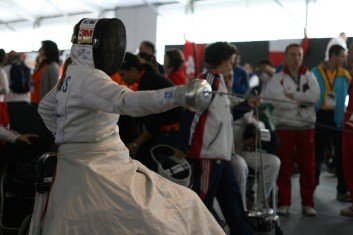 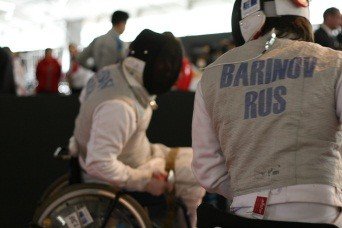 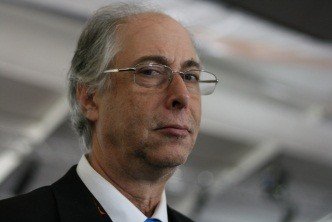