I first met the Indian wheelchair fencers in Montreal 2014 at the IWAS (International Wheelchair and Amputee Sports) World Cup competition, which was a surprise as I didn’t even know that they participated in this fantastic sport! It was then that I promised them I would come to India and help in the coaching and development of Wheelchair Fencing.

Two years later and following my return from the Rio 2016 Paralympic Games, I had a two week break before flying to Delhi then eventually on to Karnal.

With the help of Vibhas Sen (Category A fencer), we managed to set up with the Karnal Fencing Club a two-week training camp for both Wheelchair and able-bodied (AB) fencers.

This was the first time I had visited this Indian Wheelchair Fencing Club and the information on facilities and numbers of fencers was not available until the start of the camp. When I arrived at Karnal Sports  venue, exhausted from a nine-hour flight, a two and a half hour transfer by car in the infamous Indian traffic and a short sleep, I was more than a little surprised!

We had up to eighteen wheelchair fencers, mostly Category A with one Category B practising all three weapons. Unfortunately, with only one frame and just two chairs, we had to be a little imaginative on how everyone was going to train! Lack of equipment, masks and weapons made things even more difficult particularly when the able body fencers were training at the same time.

Standard training times were 9.30am-12.30pm followed by 3pm-7pm.  At the start of the second week, I began extending through the lunch break to offer 1:1 lessons to the fencers.

By stacking up fall matts and covering with a sheet we devised the following: 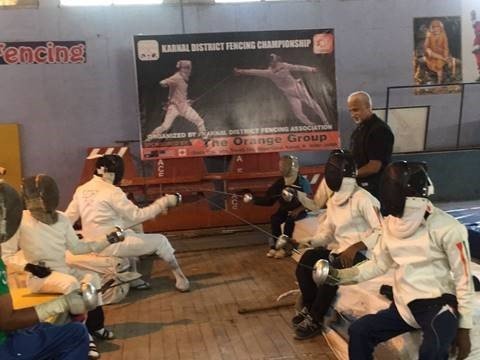 I began by demonstrating some warm-up exercises without the blade first, followed by blade exercises, then setting pair exercises and depending on how they managed would go to the next level of actions in each weapon. With the help of the Club Coach, Vikas Dhania, we managed to ensure everyone was on the right track. This would be followed by some fencing on electrics (only one scoring box) and 1:1 lessons with me.

To ensure coaching development continued, my lessons would be videoed for the future reference of the club.

What immediately became evident was the utmost respect everyone gave the coaches and the committment shown by the fencers. There was an abundance of humour and smiles, especially since I did not speak Hindi very well, but could understand if they spoke slowly! My language is Punjabi which most could understand, so between us, we managed!

My initial impressions were very good with the basic level of fencing ability within the group. Of those fencers that I first met in Montreal, their ability had improved and I was hoping to give them a little extra from my experience of world class wheelchair fencing.

These ideas they quickly adopted and I was pleased to see that they would try and use these as they fenced on the electrics. 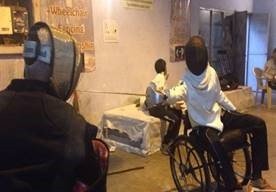 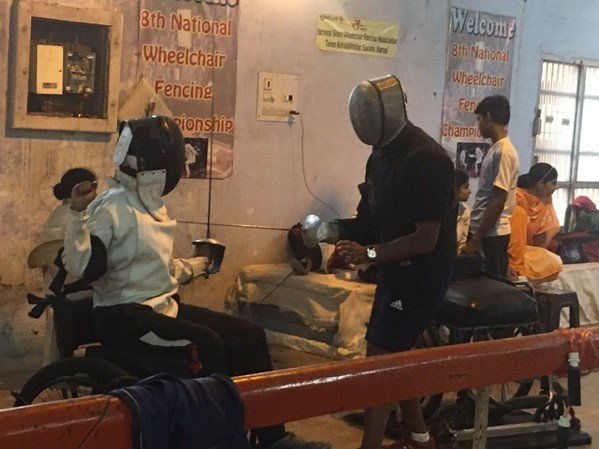 Exposure to international wheelchair fencing for both the fencers and the coaches is a major financial hurdle that limits their progress and learning. The current method is to view YouTube videos and try and copy what fencers are doing. This has an inherent danger in that if they see a particular action incorrectly they will practise that and un-learning then becomes difficult.

Access to high level coaching and sparring partners makes progress slow. India is such a huge place that, like most clubs you have one or two good fencers who train together but exposure to others is very limited. For the training camp three fencers had travelled two days by train to get to Karnal!

With a two-week period, the temptation was to show them multiple techniques in each weapon, but we realised that this would be counter-productive, so depending on the level of the fencer I would try and give an individual learning plan, with video recording and explanation of how to go back to their own club and continue training.

Four of the fencers also attended competitions in Eger, Hungary and Sharjah in 2015 and some are planning to attend Eger in 2017.

Wheelchair Fencing numbers are large at state and National competitions, especially for women, and with the two Gold medals India won at the Rio 2016 Paralympic Games, awareness of Paralympic Sport has risen and the government are pledging future funding across the sports.

In March 2017, I am planning a return visit to Karnal for another two-week training camp in conjunction with their National Championships. I hope to be able to provide further camps in other regions of India, extending the invitations to other nations to attend. 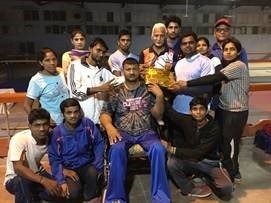 IWAS thanks Baldip for his dedicated support of the promotion of Wheelchair Fencing.