Beginning her career as a recently qualified coach in 1993, Body had been attracted to the sport after seeing a demonstration.

Her first big competition with the British team was the European Championships in Blackpool in September 1995.

Back then she was the only one of two people doing the role and things were very different to the way many competitions are organised now.

“Unusually in Blackpool, we managed to have the hotel and competition in the same venue. So, transport wise it was great, as people flew into airports, got to Blackpool and that was it. In those days, the biggest issue was transporting people from hotels to the competition. It just worked, that was the biggest benefit. And there was genuine excitement around Britain hosting. It was their first Europeans and there was lots of people willing it to go well.”

It is striking also, as Body recalls, that athlete numbers were relatively high for a sport which was relatively obscure at the time.

“I remember all the teams arriving and it went on forever. It seemed a fair amount, definitely in double figures. It wouldn’t be the numbers at competitions like they are now though.”

Body goes on to reminisce about the years that followed. Italy and Poland were regularly holding competitions. In particular Body remembers how quickly Poland started their programme, despite a slow start.

Body details how in Blackpool countries had to lend their athletes equipment and officials had to fix it late into the night before competition. But in 1997, Body and the British team were invited to do a demonstration event in Poland. This proved a turning point and afterwards the country really accelerated their development.

Returning to her other memories, Body recalls her first World Cup in Pisa, Italy, in the late 1990s:

“I remember a World Cup in a bus garage. Every now and then during competition the pit for mending buses was taped off so people didn’t fall in! It was a big bus garage with pits and lanes for buses which had to be fenced off so you didn’t fall in!

“I got back, and my friends asked me how Italy was and all I’d seen was the inside of a bus garage.”

In terms of equipment and rule changes, Body can add a lot of detail to the records.

She remembers how the electronic scoring lights used to be the opposite way round for example, how the pistes were so heavy they used to take six people to move and that athletes would compete using their day chairs rather than fencing chairs. 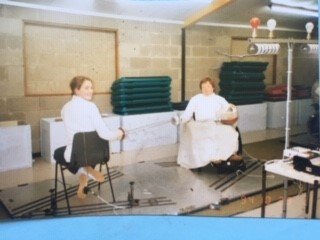 There is even evidence of countries using their own innovative approaches to try to gain an advantage, according to Body:

“I think I went to one world Cup in France in the late 1990s, before there were any guidelines for fencing wheelchairs. One nation had built a chair like a high chair so their opponent was unable to reach them. After this the proper guidelines, rules and regulations were introduced.”

Fast-forward to the present day and Body is now a Board member of Wheelpower. After being at London 2012 with the ParalympicsGB and a Team Leader at Rio 2016, Body’s views of what has helped Great Britain to success in recent years will not come as a surprise:

“I think at first other nations were ahead of us, we had one main coach with John Townsend and I assisted him. In contrast some of the nations like Hungary and the eastern European countries were sponsored by the state. If they won medals at a Paralympics they received funding from sponsors and government. They seemed to be far more ahead.

“I guess the big change for Great Britain was the lottery funding coming in and therefore we were able to invest in supporting athletes with things such as physios and psychological help. We played catch up really, but London 2012 and lottery funding were game changers.”

To celebrate 65 years since wheelchair fencing became a competitive sport, IWAS Wheelchair Fencing is running a history campaign which aims to gather as much as information as possible about the last six decades.

Any pictures, results, records and footage can be sent to [email protected] and will be saved in the archives for future generations.