When Chan Yui Chong attended the farewell dinner after the IWAS Wheelchair Fencing Grand Prix in December, she thought she would just be enjoying a relaxing post-competition evening with friends. In fact, the most exciting part was still to come.

When Chan Yui Chong attended the farewell dinner after the IWAS Wheelchair Fencing Grand Prix in December, she thought she would just be enjoying a relaxing post-competition evening with friends. In fact, the most exciting part was still to come.

When boyfriend and fellow wheelchair fencer Tam Chik Sum asked her to marry him in front of the whole room the answer came easily.

Despite officials and athletes from around the world being in attendance at the proposal, Sum claims he didn’t feel extra pressure: "No, I didn’t feel nervous because of that. I really wanted to share the occasion with my fencing friends."

Chong also feels that being able to celebrate with teammates and the wider wheelchair fencing family made the evening extra special, though it did come as a surprise.

"I didn’t expect Sum to propose" she explained. "We had talked about it before and agreed it wasn’t necessary for him to propose.

"It was very moving, and I was happy that my friends from wheelchair fencing could join us."

The couple married in January, and their fellow athletes were again an important part of the occasion.

"Our teammates helped us a lot during the preparation for the wedding, and most of them joined the banquet, too" said Sum.

"We are all quite close as we train together five times per week. We see each other probably even more than we see our families."

The pair now look back on their special day that was "full of love and blessings" with fond memories, though admit the festivities were tiring, even more so "than a whole day of competing" according to Sum.

Chong, who competes in women’s category B foil and epee events met Sum, also a category B epee specialist, at a training camp ahead of the Beijing 2008 Paralympic Games. At that time, Chong was already established as a top competitor but Sun had yet to make his mark in the sport.

They got on well, but it was not until after the Games – where Chong became double Paralympic champion – that they became a couple.

As top performers in their sport, they are happy to be able support each other at tournaments around the world. Both say that they are actually more nervous when the other competes than before their own events.

Though wheelchair fencing brought them together, they say that discussing sporting matters together ends when they get home.

"We will discuss technical issues inside the training venue, but outside of that we seldom talk fencing," said Chong.

"We go out and enjoy our free time, we like going fishing or just having fun with friends."

And while the newlyweds remain focused on sport, they say no defeat will dampen their married bliss.

"Of course we would like to achieve sporting excellence in future events," said Chong.

"But now, away from sport, simple everyday life is a blessing." 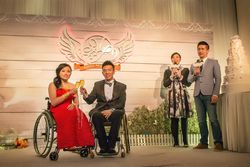 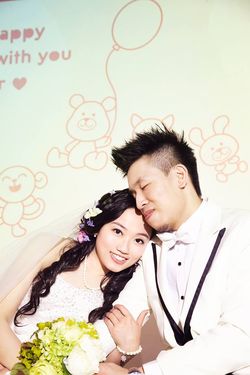