Sixteen-year-old Beatrice Vio will be one to keep your eyes on at this weekend’s IWAS Wheelchair Fencing Grand Prix.

The IWAS Wheelchair Fencing Grand Prix takes place in Lonato del Garda, Italy this weekend (24-26 May) with a strong Italian squad determined to make the most of its home advantage.

Attention will be on the sport’s young Italian star Beatrice Vio, 16, who is hoping confidence gained from victory in the women’s category B foil event at last month’s Grand Prix event in Montreal will help her take the title in Italy.

Vio won silver in Lonato last year and with her good form heading into the competition she hopes to do one better that now.

“I was very happy and excited to win the gold medal in Montreal,” she said. “After three silver medals, I was doubting if I was able to win again.”

She is aware, however, that the competition in Lonato will be stronger than it was in Canada,  identifying reigning Paralympic champion Dani Gyongyi of Hungary and Marta Makowska of Poland among her main challengers.

Whilst she is looking forward to competing in Italy, Vio claims that the strong spirit within the Italian squad gives her an advantage at every event.

“I always feel at home with my teammates supporting me,” she said.

Vio’s compatriot Matteo Betti is seeking a consecutive victory in Lonato, having won the title in the men’s category A epee discipline at the event last year.

Betti, who won bronze at London 2012, is hoping to reap the benefits of strong home support and an intensive training programme in Lonato. He sees the Grand Prix as an important part of his preparations for August’s World Championships in Budapest, Hungary.

“Since the London 2012 Paralympic Games I’ve tried a new kind of training with my coach Fabio Giovannini, working on deconstructing and improving every simple movement. It’s not easy,” he said.

“I always prefer to compete in Italy, in front of my supporters. I don’t suffer extra pressure.

“There are a lot of fencers who come to Lonato to get a gold medal and everyone could do it. I know my strongest challengers in the foil and epee events, but in the year after the Paralympic Games everyone also has to pay attention to new fencers who await these occasions to try and surprise us.”

Fellow Italian Alessio Sarri will compete in the category B foil and sabre events and is also expecting a tough competition.

In the sabre contest, he noted that Ukraine’s Anton Datsko and Poland’s Gregorz Pluta of will also be athletes to keep tabs on.

Pluta took the gold medal in the sabre event at London 2012 and Datsko has been in incredible form with the foil, building on a silver medal in London with two Grand Prix titles in the discipline, including last month in Montreal.

Sarri will head to Lonato with confidence, however, having beaten both rivals to the sabre title in Canada.

“I’m very excited to compete in Italy, in front of my home crowd and my friends,” he said. “As usual I will give my best, but I will have fun and enjoy it also.” 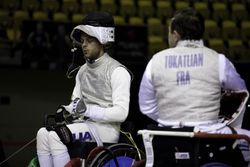