Emanuele Lambertini, Michele Massa, Andreea Mogos and Alessia Biagini joined forces for the debut of the event, which was the first to combine the mite of men’s and women’s fencers at this level.

The Italian’s had to get past the host’s team of Jovane Guissone – the winner of the men’s individual foil category B from earlier in the week – and Alex Sandro Souza, Monica Santos and Fabiana Soares for gold.

With Lambertini and Mogos both winning the respective men’s and women’s individual foil, the quad had what it took to triumph as a collective. 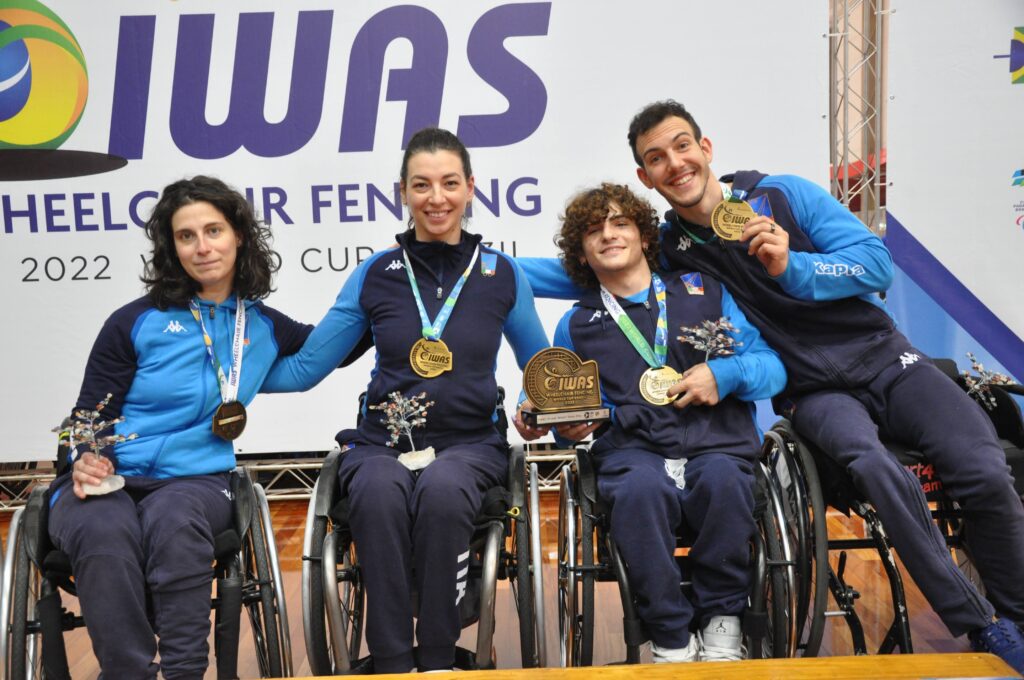 The teams have enjoyed a successful week in Sao Paulo with individual medals going back to both countries.

With the stage set for an epic clash, Iraq’s Zainalabdeen Al-Madhkhoori, Ammar Ali and Hayder Al-Ogaili built a 15-8 lead in the first three rounds.

There was little to separate the teams from then on, but France’s Yohan Peter and Gaetan Charlot and Platania managed to hold onto the lead.

It took a stunning final round performance from Al-Madhkhoori, scoring eight points without return from Charlot, to secure the win for Iraq.

Over in the bronze medal match Italy and Brazil featured once again.

Guissone brought Brazil right back into the match in the fifth round against Gianmarco Paolucci, adding 11 points to their score for a two touch lead.

Matteo Dei Rossi then reclaimed the lead against Sandro Colaco but only by one point. Lenilson De Oliveira was able to jump ahead once again for Brazil against Paolucci.

However Italy’s Matteo Betti proved too much for Colaco to handle in the penultimate round and Dei Rossi was then able seal the 45-36 win against Guissone.

World champions Georgia were the victors in the women’s sabre team, following on from their world title win from 2021.

An early lead established by Tokyo 2020 silver medallist Nino Tibilahsvili proved too difficult for their opponents Italy to overcome in the final.

Tibilashvili was joined by Irma Khetsuriani and Gvantsa Zadishvili, reforming the trio who had claimed the Worlds gold less than 12 months ago.

A busy day for Mogos also saw her contest the gold alongside Rossana Pasquino and Loredana Trigilia, but the team had to settle for silver.

The 2022 IWAS Wheelchair Fencing World Cup ran from 14-17 April and featured men’s and women’s category A and B competition in individual and team sabre, epee and foil.

Fans can watch all semi-finals and medal matches back at the IWAS Wheelchair Fencing website, alongside results.

Next up is a World Cup in Chon Buri, Thailand, from 19-22 May in a season which features a total of five World Cups and regional Championships in Europe, Asia and the Americas.