The International Wheelchair and Amputee Sports Federation (IWAS) is mourning the passing of one of the grandfathers of wheelchair fencing: former IWAS Wheelchair Fencing International Secretary and seven-time Paralympic medallist, Brian Dickinson MBE.

Dickinson’s involvement in wheelchair sport followed his move to Blackpool, Great Britain, in 1957. An operation to remove a cyst on his spinal cord on his 21st birthday led to him becoming paralysed. Dickinson was treated in Southport and took up sports, travelling to the Stoke Mandeville Stadium for competitions.

Dickinson won a total of seven Paralympic medals between 1964 and 1992. At the very first Paralympic Games in Tokyo, Japan, in 1964, Dickinson competed in wheelchair fencing and swimming, winning bronze in the men’s team epee and also taking home two swimming medals.

At Tel Aviv 1968 he competed in swimming and wheelchair fencing, also adding wheelchair basketball to his resume and retaining the men’s team epee bronze from four years before. 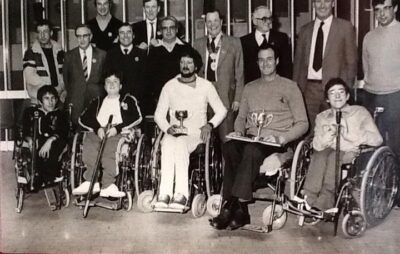 In 1984 Dickinson expanded his involvement beyond the field of play, playing a role in staging the Paralympics at Stoke Mandeville after hosts the USA pulled out. He also added an individual bronze to his trophy cabinet in the men’s sabre class 2-3 as well as the same colour in the men’s team sabre.

At Barcelona 1992 Dickinson made it onto the podium again with another bronze in the men’s team sabre.

In addition to his sporting exploits, Dickinson served as the General Secretary of the International Wheelchair Fencing Committee – a precursor to IWAS Wheelchair Fencing – from 1994-2005. He also served on the Directoire Technique for international competitions and was President of the British Disabled Fencing Association, organising the 1994 European Championships in his home town of Blackpool.

In 2014 Dickinson was awarded an MBE in the Queen’s New Years Honours List for services to sport. In another nod to his impact over five decades he was a Torchbearer during the London 2012 Paralympic Torch relay.

Many of those who have had their own successful careers on and off the piste owe their careers to Dickinson, including current IWAS Wheelchair Fencing Chairperson Pal Szekeres.

“Brian’s impact on wheelchair fencing over 50 years cannot be underestimated. Everyone involved in the sport as an athlete, coach or official today has benefitted in some form from his legacy. He was a great fencer, great sports leader and coach and a great person and good friend. He loved very much his lovely wife [Val],” Szekeres said.

“In 1991 just seven months after my accident I had my first competition in Malle, Belgium, at the European Championships. Brian was very helpful with me but still beat me in epee.

“We were together for the site visit in Warsaw and he was smart and cooperative with his support for Poland’s first IWAS Wheelchair Fencing competition.

“He was a living history book always smiling and never angry. He was the organizer of the best ever European Championships in Blackpool 1995. He co-coached David Heaton with Laszlo Jakab. Sadly both have also passed away. They can meet in the heaven on the piste again.

“I will never forget you, Brian!”

Caz Walton OBE, lifelong friend of Dickinson and former manager of the British wheelchair fencing team, said: “Brian was an elegant, intelligent fencer who put so much more into wheelchair fencing than he ever took out. Wheelchair Fencing nationally and internationally owes him an enormous debt. He was a significant contributor to the sport and will be hugely missed”.

The IWAS and IWAS Wheelchair Fencing community extends its heartfelt condolences to Dickinson’s family and friends at this sad time.