The International Wheelchair and Amputee Sports Federation (IWAS) Wheelchair Fencing has sent its condolences to the family and friends of British fencer David Heaton who passed away on Saturday (9 January) at his home in Blackpool.

Heaton, a five-time Paralympian, originally played league wheelchair basketball but it was in wheelchair fencing where he really made his mark.

Heaton’s Paralympic debut came at Barcelona 1992 where he won bronze as part of the men’s sabre team. He also competed at Atlanta 1996, Sydney 2000, Athens 2004 and multiple World and European Championships and World Cups in a career that spanned four decades. He retired after London 2012 where he competed in the men’s foil team.

IWAS Wheelchair Fencing Chairperson, Pal Szekeres, said: “It is with great sadness that we received the news of David’s passing over the weekend.

“He was a friendly figure on the circuit for many years who helped inspire the next generation of athletes at home and abroad. It is no coincidence that Great Britain has some of the world’s top wheelchair fencers. They follow directly in his footsteps and many more will do so in the years to come. My thoughts, and that of the IWAS Wheelchair Fencing Executive Committee and wider community, are with his wife, family and friends at this difficult time.” 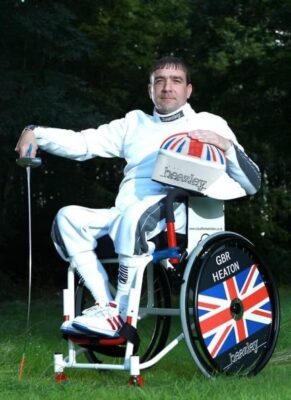 Caz Walton, a former Team Manager for Great Britain and 10-time Paralympic medallist from multiple sports including wheelchair fencing, said that Heaton had fought cancer “quietly and courageously” for the last 18 months.

“[David] was a popular figure internationally and a great ambassador for his country,” Walton continued. “David retired from international sport after London 2012 but continued to put time and effort back into the sport that he loved. He was a caring, humorous, and much-loved man and his passing, much too young, leaves a hole a mile wide in our hearts.

“Our condolences go to David’s wife Cindy and his family and friends.”

After his retirement from wheelchair fencing, Heaton became Chairman of the British Disabled Fencing Association (BDFA). During this time he oversaw a significant period of development, moving the BDFA from an association to a charitable organisation before his retirement in 2017.