Day 2 – Women’s Foil and Men’s Sabre
Wheelchair Fencing boasts a proud heritage starting in the 1950’s as one of the first sports introduced to disabled people as a form of rehabilitation by Sir Ludwig Guttmann at Stoke Mandeville, England, the birthplace of the Paralympic Games.

The fencing discipline of Epee is derived from the duelling sword used to settle maters of honour in days gone by. The sword features a spring loaded tip section which must be fully depressed on the opponents target area to register a hit. It is often said that the weight needed to depress the point is the same as the pressure needed to puncture human skin to draw blood!

Modern Sabre fencing is fast, dynamic and exciting. Based on the Cavalry weapon used by military officers on horseback, the target area is above the waist including the head, and stems from the etiquette and honour amongst officers who deemed it poor sport to injure the horse in battle.

In the Women’s Epee the Poules, Rong of China and Jana of Thailand took the first seed place following the preliminary rounds in the Cat A and Cat B classifications respectively. The Direct elimination rounds followed the poule stages with matches being contested first to 15 hits making this part of the competition more of a marathon compared to the sprint of the poules.

In the Cat A foil final Yu of Hong Kong overcame Krajnyak of Hungary 15-6 with the number one seed Rong having to settle for a bronze medal with Krajnyack’s team mate Juhasz. In the Cat B competition Jana of Thailand echoed yesterday’s result and finished top seed in the ranking but could only make bronze medal position in the foil along with Dani of Hungary. China made it a one – two finish with Zhou and Yao taking Gold and Silver medals.

Men’s Sabre followed in the Afternoon with competition being competed in two categories, with Cat A and Cat B.

In the Cat A Men’s competition, China again showed their dominance of this World Championships with Chen and Ye taking gold and silver medals, and Noble of France and Cheong of Hong Kong taking Bronze.

An almost exact repeat of yesterday’s Cat B Foil all European final was on offer for the spectators who stayed in the Finals Hall following the FIE Men’s Sabre final, saw the Men’s Cat B Sabre competition come to the final showdown between Anton  Datsko of Ukraine, this time fencing a different Frenchman, Laurent  Francois. Datsko raced to a 8-4 lead at the first one minute break and both fencers receiving input from their respective coaches which ultimately led the Ukrainian to a second victory and world title in as many days with a 15-12 score line. At the medal ceremony Datsko was confirmed as the World Champion and with two further team events ahead for the Ukrainian it would be unwise to rule out a possible four medal haul at these championships.

“As President of The International Wheelchair and Amputee Sports Federation Wheelchair Fencing Committee (IWAS WF) I am pleased to welcome all the athletes, staff and volunteers to Catania for this World Championships which is a vitally important calendar event for our organisation.  With the London 2012 Summer Paralympics getting ever closer, we are happy to welcome the Fencing delegation from the London 2012 Paralympic Organising Committee to our games and International Family.  We hope that together we will be able to provide a spectacular sporting experience for everybody involved in this prestigious event in the same way that this World Championships has been organised, delivered and received.”  Alberto Martinez Vassallo, President IWAS Wheelchair Fencing.

Photographs from the second day of competition

3. Heaton of Great Britain launches an attack in the Men’s Cat B Sabre 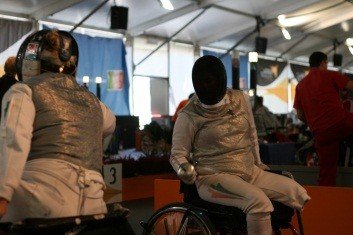 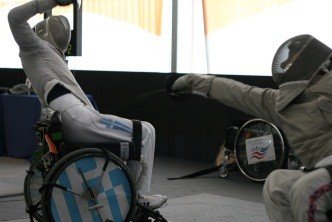 NB. All images are copyright IWAS(c)2011 and may only be used with permission and referencing and accreditation to IWAS