Ask anyone on the wheelchair fencing circuit about Robert Citerne, and they will first give you a smile.

The Frenchman – also known as ‘Bob le Ouf’ (Crazy Bob) – is one of the most respected and liked athletes after an incredible 30 years in the sport.

But whilst Citerne has a reputation for being a joker and someone who likes to play to the crowds, he has also spent his career as a serious medal contender.

Out of seven Paralympic Games, ‘Crazy Bob’ has earned himself four golds and a series of other podium finishes in team and individual events in epee and foil. In addition he has multiple World and European Championships silverware to his name, including multiple titles at each level.

How it all began

Now aged 59, Citerne made in his international debut in 1980s and made his first Paralympic appearance at Seoul 1988.

He began fencing at the age of 19 after seeing the sport up close: “Seeing the physiotherapist giving a wheelchair fencing lesson, I was immediately very drawn and excited to give it a try.

“I liked it very quickly, I was excited to take my lessons. I didn’t immediately know that it was a sport tailor-made for me; I discovered that two months after starting, during a competition where I won a bronze medal and after that the Master of Arms, Sir Marcilloux, told me that I have a gift.

“I continued at first out of curiosity to find out where it could take me and then out of passion I was hooked on fencing.”

Born in 1961 with hemiplegia that effects the right side of his body, Citerne remembers a normal, if not at times challenging, childhood surrounded by a loving and “protective” family. But as was the case for many children with disabilities at the time, he went to a dedicated school where sport was not really promoted to begin with. 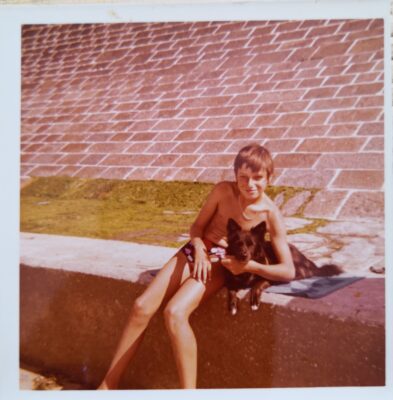 “There have been ups and downs due to my disability in my social life and at school, which has allowed me to build a strong character, to harden myself,” he said.

“I had the chance to be well surrounded, well advised…my teacher when I was in CM2 (at 10 years old) urged me to return to a “normal” school, and the family’s doctor had assured my mother that I would get by in life because he had detected that I was smart and resourceful.”

Another 10 years later, not long after he began fencing, Citerne competed at his first European Championships in Bremen, Germany. His career experienced an early bump in the road when he was left out of the team for the New York and Stoke Mandeville Paralympic Games in 1984, but the Frenchman bounced-back and was selected for Seoul 1988.

“I was excited like a child before Christmas and proud to be able to represent my country,” he said. “Seoul was my first big trip, and I was amazed by the size of this city, the people I met, and the culture shock.”

Citerne picked up his first Paralympic title in the individual epee category A and silver in the team event.

“Thanks to a strong support from the federation and the coaching of Master Marcilloux, I was able, step by step, to reach the final and win my very first Paralympic gold medal.

“The match against Kuwaiti Ahmad Habib Al-Saleh was a strong meeting because he was very fast, ambitious, with a real passion to win.

“When I won this gold medal, I immediately thought of my family who had supported me from the beginning and my previous company, Elf Aquitaine, which had granted me 80 days of leave for me to prepare for the Games.” 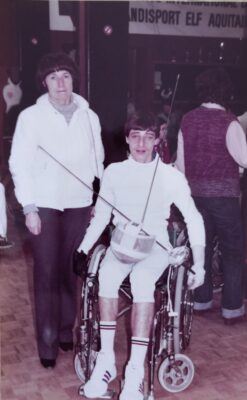 Three decades at the top

That stunning debut was the start of a long and illustrious career where Citerne would become one of France’s most decorated athletes. He has a total of 11 Paralympic medals.

During this time he has seen wheelchair fencing transform into a popular, high performance sport.

“Over the years, the regulations, chairs and handifixes have evolved a lot to approach able-bodied levels. The media coverage of competitions whether by TV or on internet channels and social networks has been the biggest change.”

However being at the forefront of so much change has meant that Citerne has had ups and downs in his career too.

He describes the joy of winning gold at the 2006 World Championships to secure his place on the team for the Beijing 2008 Paralympics, only to pick-up an injury as a result of “overtraining” and leave China without a medal.

In contrast, Citerne says his most memorable moment came in the men’s team epee semi-final against Poland at Sydney 2000:

“I take the last relay when Poland leads 40-35 and less than a minute from the end, Poland leads 43-38. I go up the score at 43/43 to tie. I put the 44th touch and the Pole equalizes but I manage to put the last touch. I dedicated this victory to Christian Lachaud the one who led us to the final.”

So amongst all his success, would Citerne do anything different?

“No regrets, I prefer to go ahead and learn from all experiences, the good and bad ones. I always say that losing is a win.”

Where will it end?

Now in the build-up to his ninth Paralympics in Tokyo in 2021, Citerne says the reason why he kept fencing at the highest levels for so long comes from the people he has fenced with and how the sport has evolved.

“The main motivation was the atmosphere and the cohesion within the different teams that I worked with. Seeing the evolution of techniques has also contributed to my longevity.”

As with all athletes, questions of retirement regularly come for Citerne. But there are not many fencers who can say they still compete with the best after three decades. Citerne was, for example, part of the gold-medal winning men’s epee team that turned over China in a dramatic final at Rio 2016.

Citerne is always one step ahead and has his eyes on the ultimate experience for any athlete – a home Paralympics. But will getting to a round number mean his will hang-up his mask?

“My personal goal is to reach 10 Games, so I want to be able to go to Tokyo and Paris – if the current context allows it,” he said.

“To consider doing my last (or not [winking]) Paralympic Games in Paris, at the Grand Palais, a highly symbolic place, and to win a title there would represent great pride and a strong and unforgettable emotion for me.”

#WheelchairFencing65 is celebrating 65 years of wheelchair fencing by sharing the stories of the some of the sport’s most prolific athletes and its history.

In 1955 wheelchair fencing made its competitive debut at the International Stoke Mandeville Games in Great Britain. It would go on to feature at the first Paralympic Games at Rome 1960.